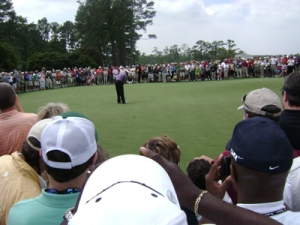 For the record, I like golf. I like to play it. Love the fresh air. Love the taylored courses. Love the comraderie of playing against my friends (or family, which is usually the case). But I don’t really understand the idea of going to a course 3 days before a tournament starts and watching golfers practice hitting at the driving range, putting on the practice green and watching them hit mulligan after mulligan until they get it just right.

But of course, this is what happens here at Augusta. On Monday I went to get some hats for family members. It took forever to work my way through the crowd to get to the store! This was on Monday! I went to walk the course. You had to go with the flow of people or get trampled! It’s crazy here! And then today, a friend of mine asked me to go back to the store to get him some things. I almost didn’t make it back to work!

Here’s the thing about Augusta National. It’s a very exclusive club. If you can get on the course, it’s something you’ll always remember. Even if you’re not an avid fan, it’s pretty impressive. That being what it is, I don’t know if I would be waiting at the gates at 8am and then sticking around until sundown to watch these guys putt around. But that’s me.

I know this…my dad watches the Golf Channel from the moment he wakes up to the minute he goes to bed (unless the Buckeyes are playing). The only time he doesn’t watch is when he is out playing golf. He then TiVos the Golf Channel and replays it later. For my Dad, golf is not just a game where a guy hits a ball with a stick…it’s a way of life! If he could get on the course at Augusta, you would have to drag him by his ankles to get him to go home!

But as for me? I don’t get it. Watching guys hit a ball isn’t my cup of tea. I lose the ball in the sky. I’m not impressed with super-long, John Daly drives. I’m just not. However, someone hits a buzzer-beater to send a game into overtime for the National Championship, I’m all over it!

To each his own, is what I say. Here’s what Augusta does for me…it makes me think of my Dad. And for my Dad I say this…golf IS like life. One bad swing and you’re in the woods. I’d like to thank him for teaching me to hit the ball straight and keeping it on the course. It’s really all a father can do for his son…and he did it well.

This entry was posted in What The Heck...?. Bookmark the permalink.

2 Responses to What The Heck…Golf Fans?