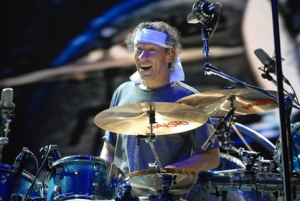 It’s been a long time coming, but finally Van Halen made it to Cincinnati…about 30 years after their first tour through the Queen City back in 1978. Did they still have the good stuff? Hell yeah!

Unfortunately it was Cincinnati that let them down. Not the fans, mind you. We were there and ready for their party. But US Bank Arena’s acoustics SUCKED. Putting that aside, Diamond Dave looked like he was having a blast (seriously, other than Perry Farrell, I’ve never seen an entertainer smile so damn much), Eddie was awesome as usual, Wolfgang was incredible for a guy his age and I’m saving the best for last. Alex Van Halen is, undoubtably, the greatest drummer ever. I’ve seen a lot of drummers, but this guy rocked it like nobody I’ve ever seen.

Every concert has its gratuitus drum solo. Usually its so the rest of the band can go change shirts. But Alex put on his own show for about 10 minutes that was unbelievable! And all of his drumming throughout the night was incredible. He was definately worth the price of admission.

Of note…things kinda started slow (Running With The Devil was okay), but about 4 songs in they ripped into Beautiful Girls and that was that. From there they did Janie’s Crying, Pretty Woman, Panama, Eddie did his guitar solo, David Lee did some high kicks and wore several goofy carnival hats, and everyone was entertained. The highlights for me, personally, were “Everybody Wants Some”, “Ice Cream Man” (which started with Dave giving a long winded tour down memory lane), and “Beautiful Girls”. The real downers were just about anything with a keyboard which was played by audio track. The track was too loud and for the finale, “Jump”, the band seemed out of time. But that didn’t deter from a great party!

One additional note, the set was kinda bland, not much to it but a big jumbo video board. But I’d like to compliment the video team that the tour has. They were all over it! The handhelds followed each band member and the way they were implemented up on the screen was awesome! They did a really good job keeping it moving!

Nice job guys! A good time was had by all!

This entry was posted in Thoughts. Bookmark the permalink.