No, no, no…not my last BLOG silly! It’s something totally different! For those of you who don’t know what I do for a living, I create graphics for television sporting events. So if you are watching a game on tv, I am the guy putting the stats up on the individual players and stuff. It’s a great gig and I get to travel and watch sports and work with some extremely talented people. Anyway, “The Last One” refers to the only stadium I have not been to…Soldier Field in Chicago. And, oddly enough, this week for my 40th birthday, as luck would have it, I am working a game there for the NFL Network!

That’s 31 stadiums (32 if you include Wimbley in London and don’t forget that Giants Stadium is also home to the Jets) and you can see me in all of them in the “Places I’ve Been” tab at the top of my site here. It’s nowhere near as cool as being in every baseball stadium or traveling all over the world! But for me, it’s been kind of a journey. It took me only 3 years! Of course, I’ve been to several of these places several times, but some of them I’ve only been to once (Dallas, San Francisco). So getting to Chicago hasn’t been easy…but now it’s over! All 31 stadiums accounted for!

Until next year when Dallas gets their new home. Then I gotta get there again somehow!  🙂 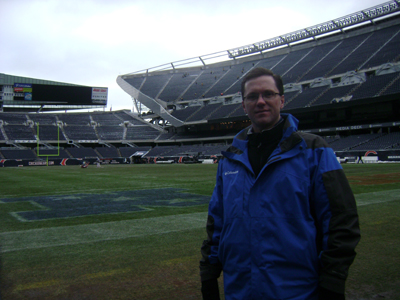 8 Responses to The Last One