True Or False: I Have 3 Kids

Wikipedia…the bastion of all things that are true & real (much like television), lists a misnomer as…

“A term which suggests an interpretation that is known to be untrue. Such incorrect terms sometimes derived their names because of the form, action, or origin of the subject—becoming named popularly or widely referenced—long before their true natures were known.”

I honestly have no idea what that means..but here is my point: most people think I have 2 children. THAT is a misnomer. Because I have 3. No, no…I don’t have a child with another woman. Seriously…when would I have the time? No…my 3rd child lives in my house and he is a little different than the others. It’s because he is a dog. Now…the other 2 animals that live in my house are felines…and they understand that they are in charge and there is no disputing this. However, my dog Barkley somehow thinks that he is one of the kids and feels that he should get just as much attention (if not more) than they do! He is constantly at me, as soon as I walk in the door. Jumping around, wanting to play, wanting to eat my food. It’s getting a little disconcerting.

I gotta give the pup credit though. Every morning he wakes up and he’s happy to see me. I might be in a bad mood as I shuffle to the kitchen door to let him out, but he always follows behind me so he doesn’t get in my way. He shakes and trots and, as I open the door for him, he waits until I pat him on his head before he goes out. Seriously…he won’t go out until I pat him on the head! How this all started, I’m not sure. And then when he comes back in…he gets a treat. And if I decide (because I’m evil and can be a shithead some mornings) that he doesn’t NEED a treat, I get the staredown treatment. Which means he doesn’t take his eyes off of me the entire morning unless he gets that treat! It’s like he’s a crack addict or something with these damn dog treats already!

And don’t even come into our house and utter the word “toy”. Because if you do…be prepared for hours of non-stop annoyance entertainment! He loves to wrestle with this red & white rope that we got him as a gift. And if he can’t find it, he’s got a whole toy box behind the chair that he can pull out and use. And what does he want ME to do with this? Well…I have to tug at the other end, of course. What fun is chewing on a rope if there’s not someone on the other end trying to pull it away? Oh the humanity if you don’t PULL ON THE DAMN ROPE ALREADY!!!

So…let’s not be fooled into thinking that I have only 2 children. That is definitely a misnomer. I have 3. The 3rd one is named Barkley. He is a dog. And he likes to play with his….shhhhhhhhhhhh…. 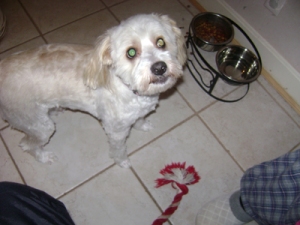 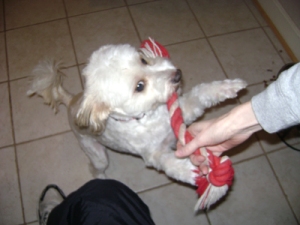 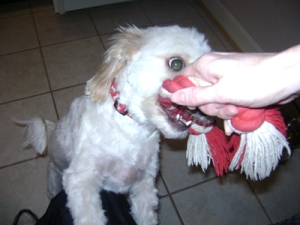 This entry was posted in Family Life, Kids, My Life and tagged Barkley. Bookmark the permalink.

7 Responses to True Or False: I Have 3 Kids