I wouldn’t say that Disney’s Hollywood Studios is the best “movie” theme park in Orlando (Universal looks WAY cooler!), however it does offer some really fun things to do and for smaller kids, it might be the better of the 2 parks. We went on Thursday and immediately took a left hand turn to go to the Star Wars themed part of the park. Why, you ask? Well…you must not have a 6-year old son if you are asking “why?” because…well…Star Wars is really freakin’ cool! That’s why! 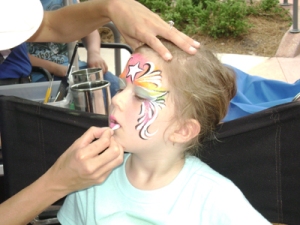 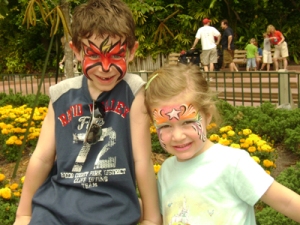 And what’s even cooler is that YOU get to train to be a Jedi right there in front of the Star Tours ride! And what’s even cooler than that is that you get to battle Darth Vader in all his black suit badness!!! How COOL is that?!?! You know what WOULD have been cooler than that? If Christopher had been picked the first time he went to see the training. You see, the Jedi Master only picks a select few to train…so Christopher didn’t get picked the first time. Oooooor the second time. Ooooor the third time. Finally…on the 4th trip, we all were shouting and pointing at him and the Jedi Master deemed him worthy to face the evil that is the Dark Lord. Or maybe it was because at that point we had let him get his face painted and he looked like Lord Sith. Whatever…he finally got in!

Christopher gets his “training” saber

His schwartz is as big as yours, Vader!

So battle Vader, Christopher did! And the Force was with him that day. His team of younglings defeated Vader and his stormtroopers and sent them scurrying back to another giant…space station…ball thingie…NEVER to return again!!!

And then we had lunch at a really cool restaurant that was built like an outdoor drive-in movie theater, only it was inside and the food was yummy! Also they show old B-movie trailers while you eat in “cars” parked under the stars. And our waiter was funny and actually ripped my $50 that I asked him to split into smaller bills (for a tip), only he thought I wanted him to rip it into…ah…nevermind.

I LOVED the old trailers!

The kids loved the waiter!

And for some reason, this woman loves me…

Anyway, we also hit the new American Idol Experience which was super cool! Except when the host comes out…and he’s NOT Ryan Seacrest and the judges AREN’T Paula & Randy & Simon. Instead, they have standins who do a decent job and they actually have contestants compete for tickets to get to the front of the line at any location for the next trial runs for the real AI! The set was awesome and it really was fun watching it all happen in real life…even if it wasn’t really the real deal. The only bad part of the whole thing? Rampaging teenage girls about crushing my daughter as they herded past her to get in the front row. Stupid teenage girls. 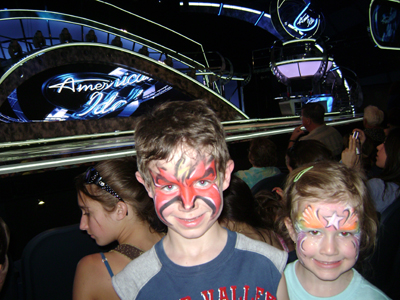 Other highlights included The Great Movie Ride with animatronic movie scenes such as “The Wizard of Oz” & “Aliens” (Ava didn’t like that part) and we liked that Star Tours so much that we actually DID ride it a 2nd time after Ava asked to “do it again”! And we let Christopher buy his own lightsaber that had 2 sabers! One on each end! And it is about 6 feet long! Wow! THAT was really cool!

Putting the saber together

Overall, a great day! Then on the way back, we got off the bus at the wrong stop and had to walk an extra 15 minutes back to our hotel room. Stupid bus system. So bedtime that night? 11pm. Ugh…

Tomorrow…EPCOT Center. And boy, was THAT a lot o’ walkin’…