Right Is The New Left 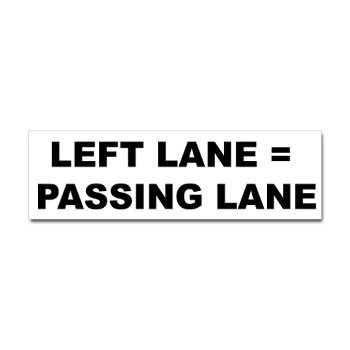 I drove 7 hours to Memphis on Friday. Then drove 7 hours back to Cincinnati on Sunday. And I’m starting to realize something. I know I have discussed driving here on this blog before and I admit that I can get a little out of sorts when it comes to other people driving on the road. But here is what I have discovered in the last 3 days…

Right is the new left.

Remember when you wanted to pass someone? Well…I do. You could turn on your turn signal, merge over into the left-hand lane and drive past them? I used to do it all the time. I am one of those people that generally drives around 9 miles over the speed limit. It’s what I do. So I used to be able to pass those going the speed limit or driving a little slower. But I’ve noticed a growing trend over…say…the last 10 years. The trend is that everyone now drives in the left-hand lane. They drive the speed limit or less and never seem to leave that lane. Now I don’t know when this change came about, but I could swear that I used to get into the left-hand lane to ONLY to pass other cars. I never did it to drive casually to my next destination. THAT was reserved for the right-hand lane. But apparently that has changed and no one called to inform me.

Honestly…I don’t care WHAT lane is the slow lane and the fast lane. I just wanna know which one I should be in when I want to drive like a maniac a little over the speed limit so I can get to where I am trying to go. If YOU want to drive in the left-hand lane while on your cell phone/texting/applying makeup/eating/zoning out/smoking/diddling yourself/(enter other activity here), feel free to do so. But we need to get the rules out in the open because it’s starting to piss me off when I am trying to get around you and you are cruising along, not paying attention, just passing the time in what USED to be the fast lane. But now it is apparently NOT the fast lane…but no one TOLD me that that rule had changed! So now I’m confused.

So could someone PLEASE clear this up for me. And listen up everyone because the rules are whatever YOU come up with. I seriously don’t care WHICH lane is the fast lane. I just want to know which one is which. So here’s the deal…which lane is the passing lane on an interstate? Because obviously it has either changed or people are just being fu&%#ing IDIOTS and are driving with no good reason in the damn PASSING LANE!!! And if that is the case, I’m gonna be really pissed off because I have been passing on the right-hand side and feeling all discombobulated and wondering what the hell was going on but everyone else was driving in the left-hand lane and they won’t get out of my way so apparently something is amiss.

So left? Or right? ‘Cause I’m driving 5 hours today and I’d really like to be able to pass your slow ass and not feel bad about it. Thanks…and happy driving!

This entry was posted in My Life, Thoughts, Uh...Dunno and tagged Driving, Left-hand lane, Speed lane. Bookmark the permalink.

6 Responses to Right Is The New Left