I remember when I was a kid, there were a lot of things we collected. I collected comic books and action figures and video games and baseball or football cards and movie posters and Charlie’s Angels cards and…well…I dunno whagt else but you get the idea. So when my son became a little obsessed with “Pokemon” cards, I went along with it. I bought them for him and did it with a smile. Well…maybe I wasn’t smiling because the damn things are $5 a pack. But I understood and bought him enough that he could trade with his buddies. I even bought him a folder that would hold and protect all of them.

A year or so later, he no longer has any interest in Pokemon cards and I’m okay with that. For that kind of money I would rather he take interest in something else. So imagine my surprise when the latest fad hit Christopher’s school and it’snot comics or trading cards or video games or anything like that. Believe it or not, the latest fad to hit an elementary school near you is… 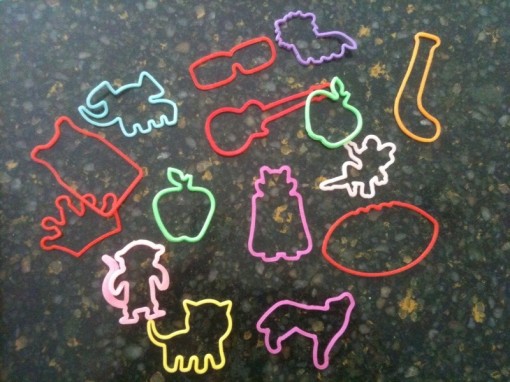 It’s true. The rubber band craze has hit and my son is knee deep in it! Kids are on the hunt for rubber bands shaped like fairies and unicorns and footballs and giraffes and just about anything you can think of. Apparently there are glow-in-the-dark ones and then there are regular ones and there are ones that are hard to find and there are any number of shapes and sizes. My kids are crazy for them and they trade them with their friends and everything! It’s crazy!

Buuuut it’s cheap. And if rubber bands are the “in” thing now, I can’t wait to see what they think of next. I’m voting for rocks. Or how about rocks that are shaped like things? Now THAT would be really cool! (wink)

4 Responses to The New Fad