Many, many, many years ago, I lived in a very small town called McConnelsville. It’s a piece of Americana, this town. A couple of stop signs, still has the old hardware store, time runs a little slower there. And it is towns such as these that make our country the great place that it is. Not a lot of action takes place in McConnelsville. Occasionally some motorcycles blare through the square, motors revving, and that is about as crazy as it gets. 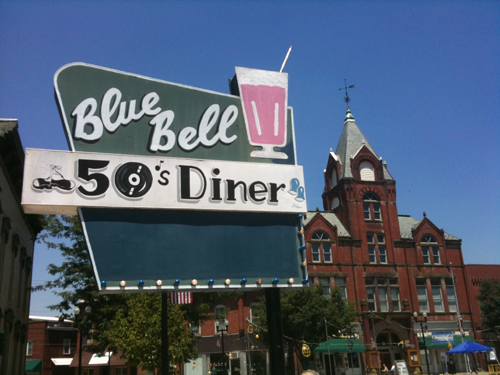 I remember back when I was about my son’s age, my dad would take me in to work with him and I would have run of the town. My parents owned a restaurant on the square (The Blue Bell) and dad had to be at work 5:30am. No one wakes before 7am in this little burg (unless you live on a farm), so I could ride my bike all over the place without fear of traffic or pedestrians. It’s little memories like these that came rushing back this past weekend when most of my family (Amber had to work, Ruth is too busy in Florida catching sharks) made the trek to visit the McConnelsville 4th of July Festival. 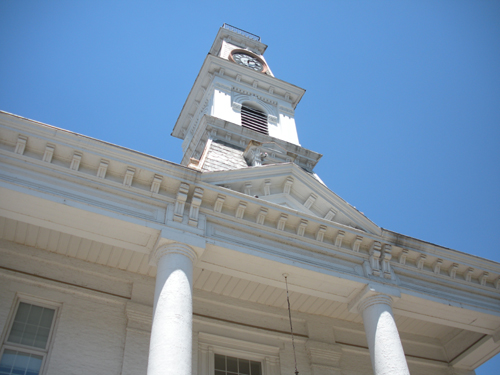 A few things have changed in this small town, with one being the time that the festival actually takes place. Instead of being an all day affair, it is now whittled down to only a few hours in the evening, so we missed playing Bingo and “Spin The Wheel” for candy. But we managed to eat at the ol’ Blue Bell (still running after all these years) and visiting the home where we used to live (my parents built a home out on Airport Road back in the 70’s).

It was fun seeing the hometown again. The Armory is closed where I used to spend hours of my days playing basketball and the Opera House  theater is under renovations (but we snuck in anyway to take pictures) but the feel of the town is still the same. Life is simpler there and the memories of it are etched into my brain for as long as I live.

The Armory. Basketball court upstairs. Unlocked door in the back. (But don’t tell anyone…)

The Opera House STILL doesn’t have air conditioning! So awesome…

So we snuck in. Nobody seemed to care. The lobby is  still the same! What a beautiful place!

McConnelsville, OH is a nice place to visit and get yourself a meal at the Blue Bell. Tell ’em Alan sent ya. They might look at you like you’re insane, but that’s ok. In a town as small as McConnelsville, I’m sure you won’t be the first to get a sideways glance! LOL

One of my former babysitters. Apparently I haven’t changed much. I dunno if that is a good thing…?

This entry was posted in Family Affair, My Life, Places and tagged McConnelsville, Morgan County, Ohio, Opera House, The Armory, The Blue Bell, The Blue Bell Restaurant. Bookmark the permalink.