What The Heck…Ohio State Players Get Tattooed? 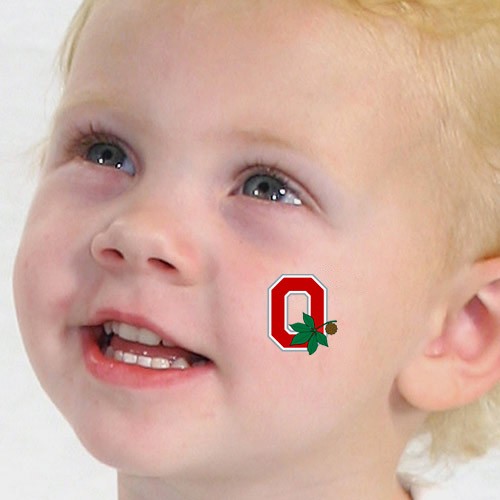 Getting an early start?

On Thursday, 5 Ohio State football players were suspended for the first 5 games of 2011 for receiving free tattoos from a local Columbus tattoo parlor in exchange for their autographs. Apparently they also sold jerseys, championship rings and awards that they had received for being a part of the 2008 Fiesta Bowl among other trinkets. Starting quarterback Terrelle Pryor is the biggest name under investigation and will be paying back $2500. To a local charity? Is that right? And the other guys will be paying back money that ranges from $1100 to $1500 to…a local charity?

Okay…I understand that the NCAA is pissed off that these players decided to take some trinkets that they consider to be honored and sell them at cost. But to suspend them for selling something that was GIVEN to them and then making them pay the money back is a joke.

Look…I understand the NCAA has rules. God knows they have an entire squad of lawyers at their beck & call to make up whatever crap pops into their heads, but the one thing they don’t seem to understand is that they are dealing with kids. Yes…they are overly large kids with arms the size of 2 of my thighs and the ability to pass a jackrabbit running at full speed, but they are kids nonetheless. And the university is taking up ALL of their time with school (providing they go to class….which I suspect most don’t), training, practice, studying of the playbook, more practice, more training and then the obligatory night out at the bars where they eventually get busted for starting a gunfight. Most “student” athletes don’t have time to be going out and getting a part-time job to help pay for all the stuff that kids their age want…like jewelry, Playstation games and tattoos. So when the opportunity comes along for them to get all tatted up and get it for simply signing a few things? Hell yeah they’re gonna do it! And if the opportunity comes around where they can make a few extra bucks parting with some things that are simply cluttering up their dorm rooms and they don’t want them anymore? Why not sell them on EBay? One man’s junk is another man’s treasure!

But THIS is different, you might say. These are Ohio State players. Big time players in the big time spotlight. They NEED to be made an example of! Well…to that I say “bullshit.” This is a joke. And the NCAA should really start doing some serious thinking about how students these days are supposed to be getting by when they are not being paid in cash (granted their education is free…but that don’t buy ya dinner!) and the little cash they do get isn’t enough to get them through lunch meals for a week.

Here’s the thing…these kids DO get money. Just not to put in their wallets. They get free meals, free room and board, free clothes, free equipment and lots of other things that I can’t really get into because it’s all illegal but EVERYONE knows it goes down. We ALL know it. These kids are making TONS of cash for the colleges they play for. They are commodities, just like NFL players. The difference is they are kids and the NCAA feels that there shouldn’t need to be any money exchanging hands for their abilities when they are giving them a free education and a place to showcase their talents so that later they can go make millions off the NFL money train. But what if they don’t? What if college is as far as they get? Who knows where Pryor is gonna end up. Or Jordan Whiting, a freshman linebacker who apparently needs to donate $150 of his lunch money to charity for the tattoo he got for free. Seriously? So the college is gonna give him $150 and he’s not gonna eat for a week? Gimme a break.

This is so much crap it’s not even worth writing about but just reading this story pisses me off. The kids look for ways to buck the system, the system bites them back. If you ask me, maybe the NCAA needs to start paying more attention to the cars some of its students are driving. Or some of the bling they’re wearing. Or some of the clothes that they wear out at night. THEN they can suspend 5 players for getting tattoos. But until then, I say this is nothing but the NCAA’s way of telling everyone “Hey! We’re still here!” and earning a paycheck. Because it’s one thing to be driving an Excalibur to school but something entirely different if a guy wants to tattoo up his arm with “I Love Mom.” Some could argue they’re one in the same…but I say the Excalibur costs more and won’t last forever. And I bet later in life the Pryor’s of the world will look back and say, “Gee…I look ridiculous. I wish I had that Fiesta Bowl ring I gave away for $300. It would really be cool to give to my kid someday.”

And THEN the lesson will have been learned. Not this way. Giving money to charity? Money they probably SHOULDN’T have in the first place (considering they were obviously selling the stuff for a reason)? How dumb IS the NCAA anyway?

And don’t even get me started on the fact that they are allowed to play in this year’s bowl game.

THAT is a farce also. If you ask MY opinion…

2 Responses to What The Heck…Ohio State Players Get Tattooed?