Dallas, Texas is the site for this year’s Super Bowl matchup between the Pittsburgh Steelers and the Green Bay Packers. This will be the Steelers’ 8th appearance and the Packers’ 5th appearance in the big game. What will transpire under the glow of the monstrous jumbotron that is perched high above the field in Dallas Stadium? Who knows? But I am here and I will be working at the stadium on Super Bowl Sunday. But until then…I’m stuck in downtown Dallas, working at the Media Center for the NFL Network. What’s gonna happen here this week? Well…we’ll be talking endlessly about this season, next season, the strike, possible Super Bowl outcomes, Super Bowl celebrities, who will be the SB MVP, who will be the first draft pick for next year, who will be inducted into the Pro Football Hall Of Fame, etc and so forth.

Needless to say, there is plenty to talk about…especially with the possibility of a strike looming over this season’s proceedings. And I’m sure there will be more than one opinion of what will happen. I don’t know what will happen but I do know this…if the NFL goes on strike, I’m gonna have to get another job! And then I’d be home all the time and I could drive my wife and kids crazy! Sounds like fun! 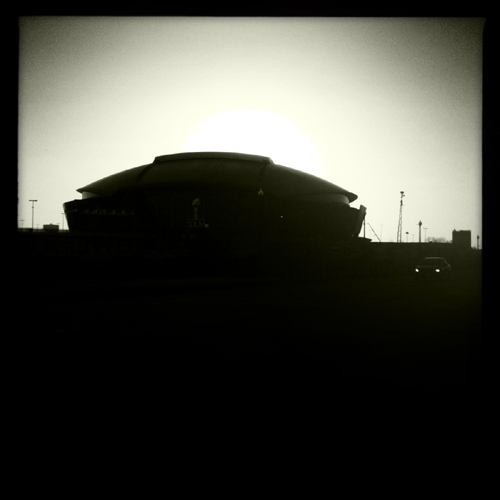 Anyway…right now its 20 degrees with winds gusting and ice covering the streets. its FRIGID cold here and I didn’t bring my winter coat. But neither did anyone else so I fit right in. February in Texas. Who would have thought it would be THIS cold. Makes me wonder what a February in New York City is gonna be like in a few years. That could be ugly…

So who am I rooting for in Super Bowl XLV? Well…I’m taking the Packers offense over the Steelers defense. The Packers are a quick strike team and do well indoors. We’ll see how the Steelers contain that. But I wouldn’t put anything past Pittsburgh. Damn if those guys aren’t resilient. I hate that about them…but admire it at the same time.