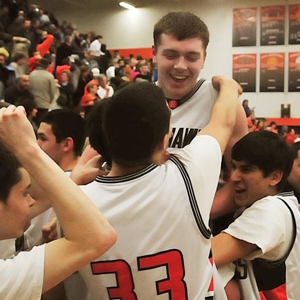 People pass everyday and there are always stories to be told. For one young man in Fennville, MI, his story is one that really struck me for a couple of reasons. The first is because I love sports. I’ve played sports and enjoyed watching sports my entire life and so when a tragedy such as this happens, it affects anyone who truly enjoys athletics. The second reason being that I have a son who is extremely active in sports right now. He’s only 8 but he has managed to become a very good athlete and I am so proud of him and to think that something like the following story could happen to him or any one of his buddies is about the worst possible thing that I can imagine.

Wes Leonard was a 16-year old athlete. He was 6’2″ (good size for that age) and was known for his sports abilities. He played baseball, football and basketball and excelled at all of them. He was a gifted kid and it looked as if he might even have the potential to go on to play college sports someday. The other night, Wes’ basketball team was looking to wrap up a perfect 20-0 season against rival Bridgman High. It was a tight contest and with less than 30 seconds remaining, Wes hit the game-winning shot. Little did anyone know that it would be his final moment of what was a life full of them. During the victory celebration, Wes suffered a massive heart attack, collapsed to the floor and died in front of all of his friends and family. They rushed him to the hospital but he couldn’t be revived. The doctors have said that he had an enlarged heart and the strain that he put on it could have been the cause but they are still unsure. Either way, the story to be told here is the life of Wes Leonard. He was a good kid, friendly and liked by everyone. He enjoyed playing sports and I’m sure he was your typical 16-year old…carefree and loving life. And then suddenly it was gone.

I imagine if you were going to glamorize a tragedy such as this you could say that his game-winning shot will last forever in the heart of the 1,400 people who were there that night. But I’m sure that isn’t how anyone there will remember him. Everyone there will remember him for his smile and his enthusiasm and they’ll forever wonder about the potential he had and what his future could have been. And as a parent, stories like this scare the hell out of me.

Live life. Don’t ever stop. And kiss your kids today. Sometimes it’s the best we can do. Because all the rest is entirely out of our control.

If you want to read the entire story about Wes Leonard, here’s the link. My prayers go out to the Leonard family and the community of Fennville. I can’t even imagine the pain they are in right now…