There have been some amazing golf moments at Augusta National but this year was unlike anything that anyone has ever seen! 8 golfers had a shot to win this year’s 75th green jacket but it was Charl Schwartzel (who?) who took home the coveted coat. In the Friday edition of the USA Today, 2 columnists argued over whether or not a different television network should carry The Masters. Traditionally, this golf extravaganza has been on CBS. For 56 years, CBS has followed everyone from Arnold Palmer to Angel Cabrera, Tiger Woods to Lee Trevino. Mike Hiestand of the USA Today proposed that this event be featured on different networks, much like the Super Bowl. So why not? Why not have Fox or NBC or ESPN carry this golf event? Would it matter to you much? Probably not to most viewers. But here’s why I think it’s perfectly fine right where it’s at….

I have no idea who these guys are…

Because for most of us that work for CBS Sports, The Masters is a family reunion.

CBS has almost 500 people here for this event. Throughout the year, we all work together at some point but at no time are we ever in a single place like this one. It’s beautiful here in Augusta in the spring and when you are in one place with 499 of your closest friends? That makes it even sweeter! All year long we work different sporting events. Occasionally we get to see each other but when you’re working, there’s not a lot of socializing time. So here, we get to shake hands, say good morning, chat a little bit and then we get to work the premier sporting event of the spring season. The Masters is a showcase for spring. There’s something about walking around here that makes you feel at ease and being around all of the people who you know are your friends makes it even more special. If there was ever a reason for one company to have a lock on an event, CBS and the Masters are it. There is a mutual respect here. We all treat this event as it should be…one of the most historic sporting events in our country. More than any other event I work, The Masters has a feel to it. The handshake deal that is made every year with CBS is strong because of the group of people that make it happen. There is an understanding between Augusta National and the network that we will do a great job, cover the event and do it in a manner that will show how special it truly is. And I am proud to be a part of that team for the last 6 years.

The CBS Graphics Crew At The 2011 Masters

I cannot lie…I am not a “golf enthusiast.” I like the sport but have never been drawn to it like others in my family. But when I can say I was a part of something as special as what happened here this weekend, I feel as if I’ve accomplished something. Today’s Final Round is something I will never forget and the fact that I got to be a part of it with 499 of my closest friends? That makes it even more special.

Ian Eagle is the voice of Amen Corner

So to Mike Hiestand I say…there’s a reason that CBS is the lone network to carry an event like this and it’s not completely because of ownership and rights. It’s because we treat this event as it should be. Its in a class all by itself and no one else would treat it this way.

The Masters on CBS. A tradition unlike any other. Yes, it’s cliche but true in so many ways. And for those of us on the crew? It means so much more. It’s a week-long family reunion and this year will forever be a moment I will never forget! 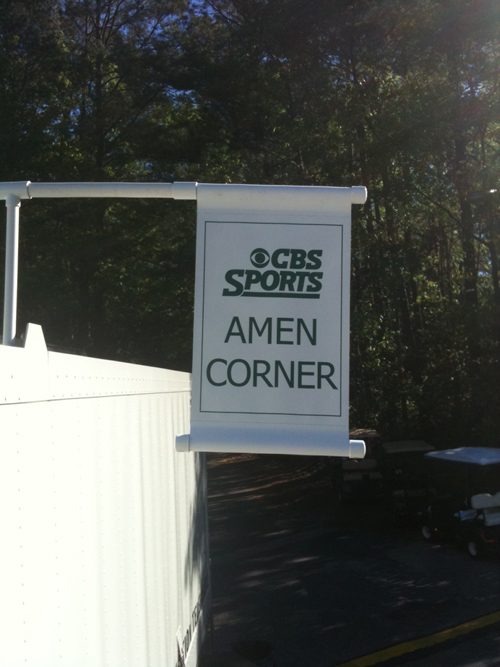