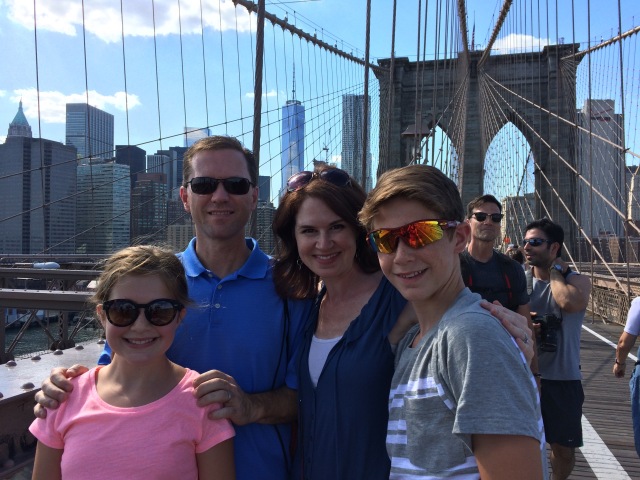 If it’s Ava’s birthday then we MUST be up to something…right? This year, we all piled into a Delta regional jet and hightailed it up to New York City for a long weekend. And trust me when I tell you…it WAS long! There is just so much to do in NYC, there’s no way you can get all of it into 3.5 days but we sure did give it a try! Let’s start on Thursday…

We arrived around 1:00 to a rather soggy New York. It was raining cats & dogs and didn’t let up until 7pm! We made our way to the Marriott Marquis, a beautiful hotel right on Times Square, and got all of our stuff unloaded. We then went in search of some lunch, finding an Irish pub just off Broadway that was perfect. After we were finished, we scrambled back to the hotel, getting completely soaked as the rain came down in buckets! Fer got the worst of it as he didn’t have a raincoat. But Ava, Steph & I also were pretty wet by the time we got back. We got lucky that the rain stopped at 7:00 because the U2 show at Madison Square Garden began at 8 and there was no way I was gonna be late for that! U2 ripped through a 3 hour set of classics ranging from “Bullet The Blue Sky” (my favorite performance of the night) to “With Or Without You.” They also did a lot off their latest album, which neither my kids or my wife knew. This kind of made the middle of the show a little slow for them but I liked what they were doing. The set was pretty cool (not 360 Tour cool though) and the way they incorporated the video screen as part of their show is pretty unique! We also got to see them perform Lou Reed’s “Satellite Of Love” (the first time they’ve done that since 1993) and Paul Simon came out on stage to help Bono through his classic “Mother & Child Reunion.” 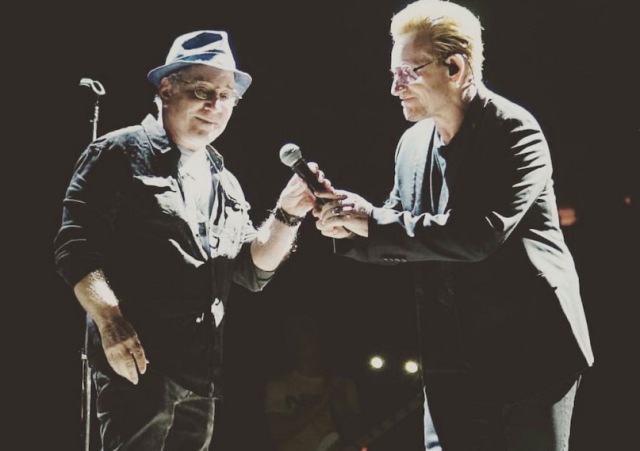 We met up with Stephanie’s friend Iris & her family for a tour of the 9/11 Memorial & Museum. Together we walked through the museum, in awe of the pictures, videos and remaining artifacts of what was surely one of the greatest tragedies on American soil. It’s an amazing place and I highly recommend it if you ever get the chance.

After spending 2.5 hours in the museum (and STILL not getting to see everything it has to offer), we headed to find food. We ended up heading toward Chinatown. The subway was packed and as we all went to get on the train, the doors closed before I could get on! Everyone got on the subway train except for me and so I found myself alone at the Financial District train stop, hoping to find my family again. It actually wasn’t THAT scary. They were just getting off at the next stop however Stephanie’s face when she saw me still on the platform when the doors closed was PRICELESS! LOL!

Once we found one another again, we went for lunch and then we made our way across the Brooklyn Bridge. I’ve never crossed the bridge on foot and so this was something new. It was a beautiful day and, despite the fact that the Love’s had done this before, they marched with us, much to the dismay of their youngest daughter Molly. I’ll let you find her in this picture…

Needless to say, it took some ice cream at a Shake Shack in Brooklyn to wipe that frown off her face! LOL! That evening, we ate dinner at the primo street meat hotspot on 53rd and 6th, the Halal Guys. I tried to explain to my family why the chicken & rice was just SOOOOOO good but they had to try it for themselves. No one likes it as much as me though and for $7 in New York City? That’s a bargain meal!

After dinner, Stephanie & Ava hit the Sephora store in Times Square and Ava bought herself some birthday makeup. Fer & I headed over to Foot Locker to get him some school shoes. Needless to say, both kids walked away happy this night!

The kids were exhausted from all the walking on Friday, so on Saturday we decided to take it easy. We woke up late (well…THEY woke up late. I was up at 7am as usual) and made it to our 2pm performance of “Wicked.” Even though Stephanie has seen it 4 previous times, I really feel like “Wicked” is THE show to see on the famous Broadway strip. It’s got everything! Great songs, a great script and the performances were excellent! We all loved it and we were singing “Defying Gravity” as we walked out of the great Gershwin Theatre.

That evening, Ava wanted to check out Madame Tussauds Wax Museum so we went for a few photo moments. Not much else to do there BESIDES take pictures actually. It’s pretty amazing how lifelike some of the figures look. It’s also kind of creepy in a way…but we had a lot of fun despite the fact that only Ava really wanted to go to begin with and as we left we all decided it was worth checking out! 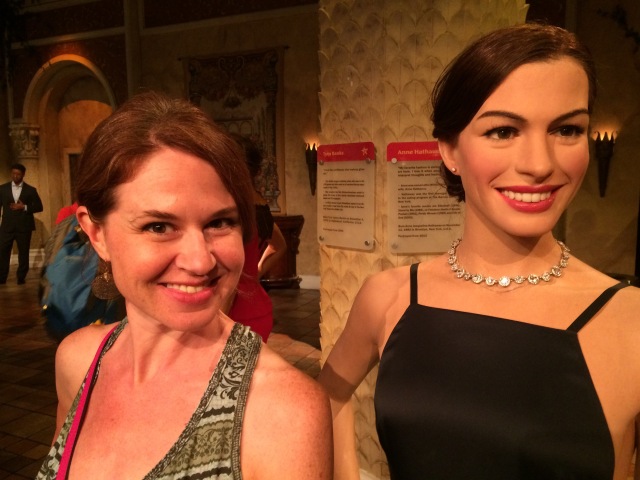 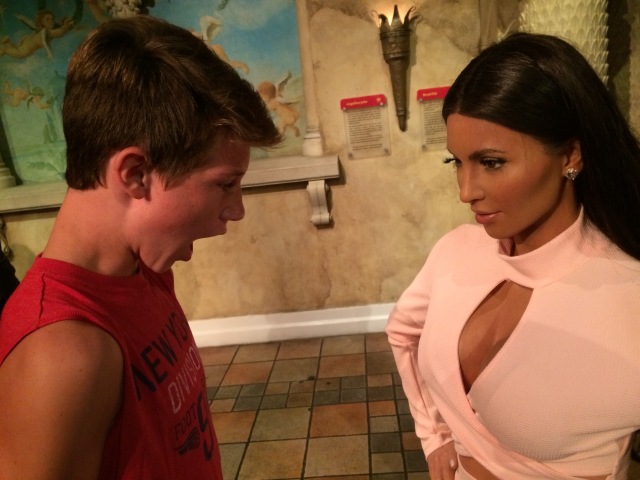 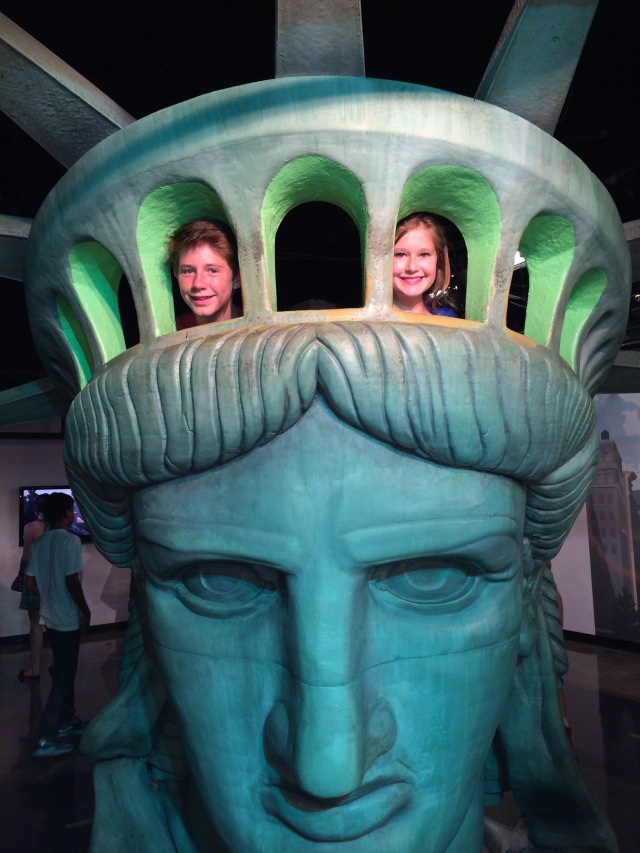 For our final day in the Big Apple, we took the subway down to Battery Park to visit ye ol’ Lady Liberty. I’ve been to the island a couple times but it was fun taking the kids to see her. Someday I would like to get in the Pedestal just to say I’ve been there but we enjoyed just hanging out on Liberty Island and drinking lemonade on this beautiful August day. 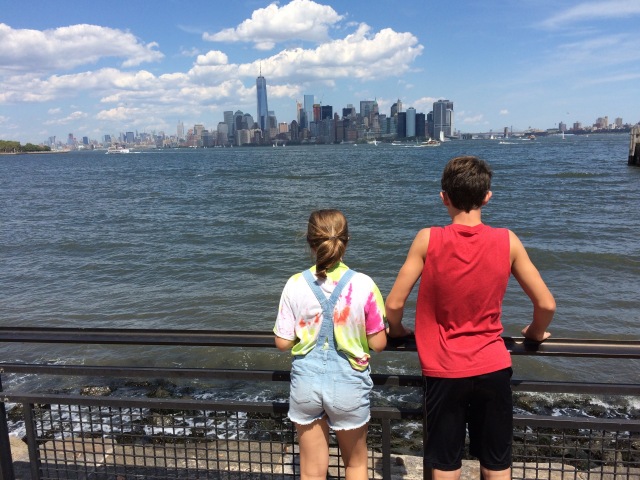 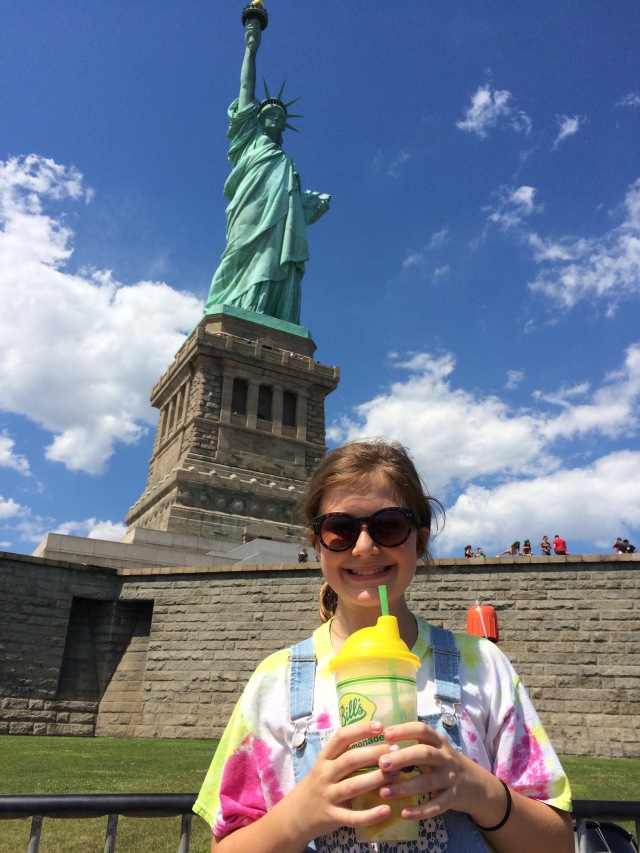 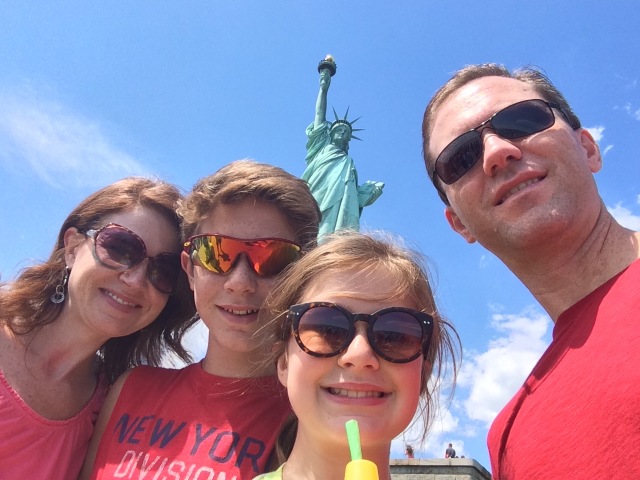 For the big finale to cap off our long weekend, we decided to go to Central Park for a little stroll and then head to Dylan’s Candy Bar to celebrate Ava’s 11th Birthday! In Central Park, the kids did a little rock climbing, we took some pictures and Ava had her portrait drawn by a skilled street artist! We then had a quick dinner of New York pizza and for dessert? Awesome ice cream sundaes at Dylan’s! We pretty much covered all the bases that we could in a few days in the big city. It was a LOT of fun and I imagine, at some point, we’ll find our way back there to do some less touristy stuff but for now…we made some great memories and had an amazing time! 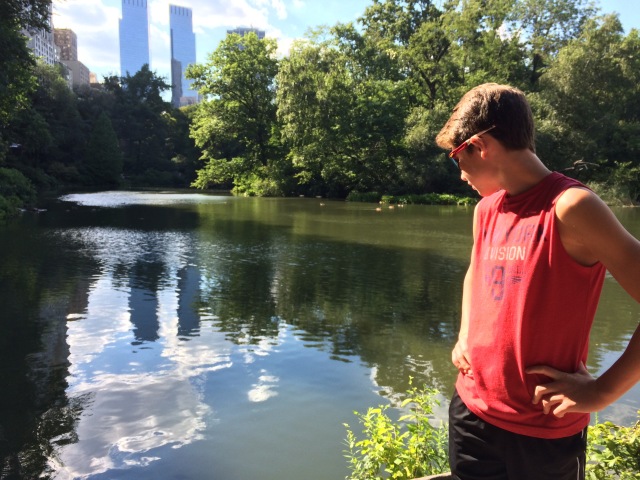 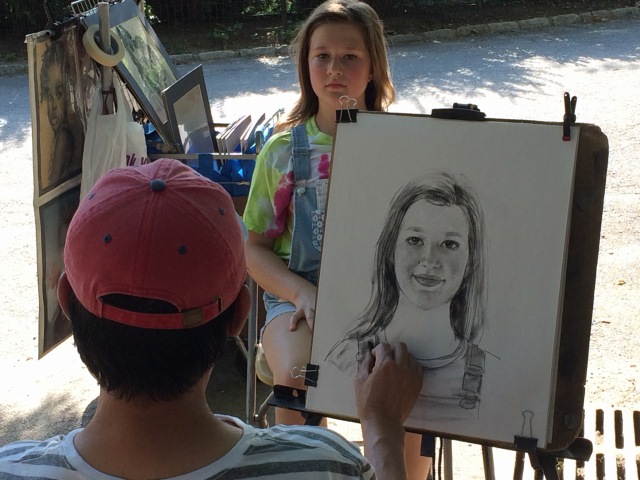 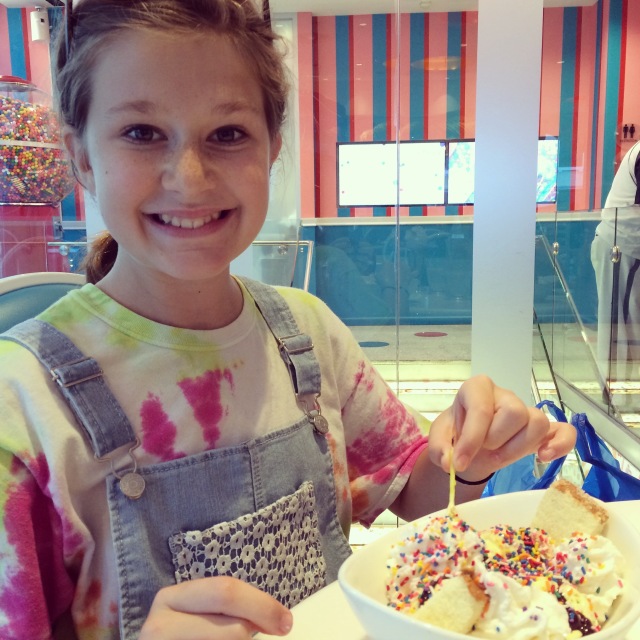