When The Memories Fall Out

Throughout The Not-So-Great Quarantine of 2020, I’ve been binging on memories. Memories of people, places and things. I’ve been through bins and boxes of old photos, remembering less anxious times and enjoying the flood of memories that I have that can put my mind at ease. Today, I tackled a job that I have been dreading. I basically removed all of the pages of an old photo book in order to make another, this time hopefully to extended the narrative of it to include where I am currently in my life. This old scrapbook included memories of elementary school (old newspaper clippings of a history project I made in the 4th grade, a dance competition I was involved in during a town festival), high school (basketball clippings, writing awards), college (tv & radio photos, awards) and into my post-college work career up until about 1994 in Dayton, OH. But the adhesive in this scrapbook was near its end and I want a restart. And so…

Now that all the memories are out, I can start fresh. But I’m sure I won’t venture far from the photos and clippings that this one had. It lasted me for over 30 years and was someplace I could go to remember moments and people… 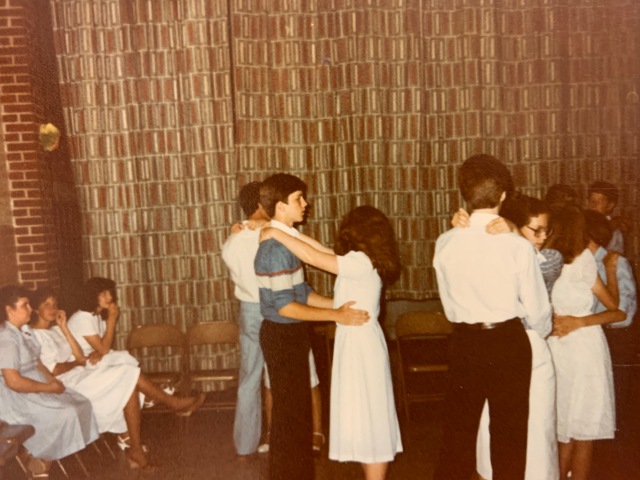 My first organized dance in the 8th grade at St. Nicholas Middle School and my first dance was with a curly red-headed girl named Audrey Scott. Audrey and I were friends back then (and still on Facebook) but little did she know she would be forever etched into my life story when she accepted my invitation to hit the dance floor. And how about this posture huh? I don’t remember this moment (probably because I imagine I was a nervous wreck) but I’m sure I was fully aware of where my hands were. It was a parochial school, after all. And the nuns were all watching! And the song? “True” by Spandau Ballet. I remember because at the time I thought that song was dumb. And now? Every time I hear it? I think of Audrey and that first dance.

Look…nevermind that the opposing team was 1-9 coming into their game against us. 24 points was the most I would score in a high school game in my career. I remember this game NOT for the fact that I scored 24 points OR for the fact that we won. What I remember the most is at halftime, one of my teammates was mad at me for “hogging the ball.” Coming out of half, I was so mad at him that the very first shot I took was an airball. I have no idea how many points I scored after that…

This was my crew back in the day. The people who were my friends. Some I stay in contact with, some have moved on. But each one of them played a role in my life during my high school years. That guy on the top left there? That’s my best friend Chuck. One of the nicest and coolest guys I’ve ever known. His Mom was my junior and senior English teacher in school and she was not only one of my favorites, but she was also instrumental in me becoming who I am today. Funny…I am on an Ohio University Facebook page and someone just mentioned that they don’t remember many of their college professors names. I can say with total honesty…I don’t remember ANY of them. But I remember my high school teachers and Dr. Lepp was one of a kind. Same goes for her son. Still one of my favorite people on the planet to this day.

In my college career, I actually attended 2 colleges. Ohio University-Zanesville is where I got my Associates Degree, Ohio University is where I got my Bachelors. My sophomore year, despite working at a tv station, 2 radio stations, going to college and trying to maintain friendships, I also somehow found the time to play ball for the OUZ Tracers. As I recall, I couldn’t travel with the team or practice because of work, but the coach needed players so…he asked me to participate during home games. I DID manage to go on the road a couple times (I vaguely remember losing a buzzer beater from a half court shot in one game) but this was the highlight of my very short college basketball career. 11 points ain’t bad when you’re only hitting the floor for a few minutes. I’ll take it. Plus…we scored 144 points?!?! Did my teammates make to the NBA or what???

While I have several pages of my college days in this old scrapbook, most of them dedicated to my college radio friends and old girlfriends, this page represented my graduation day. So funny to look at myself back then with the perspective of knowing what I know will be my path in life. I wonder…if given the chance to go back and tell myself the future, would I change anything? I’m happy to say…no. Probably not. College was 4 of the best years of my life…but it was only 4 years. Since then I’ve had many more and I wouldn’t change a thing.

Before I started doing what I do now for a living, I actually WENT to sporting events for fun. Looking at these ticket stubs, I imagine the Ohio State games were when Jay Burson was playing. Burson was Ohio’s leading high school scorer at John Glenn High School when I was a sophomore. He led the state in scoring at a time when there wasn’t a 3-point line. Obviously that record has been broken since but my Dad and I loved watching him play and went to several Buckeyes games where he played for 4 years. The Reds tickets stubs were from when I was living in Dayton, OH and working at the local NBC affiliate. A buddy and I would drive down for night games, go out after the game and then head home and be at work the next day by 4am. I miss being young. Those were fun times.

So many memories in this old scrapbook…most of the stories it would tell have been excellent. But it’s time to start a new one. Give it a fresh start. Some new adhesive. I think post-2020 Pandemic is a good place to start fresh. But these memories will always be with me and to all those who have been a part of my life to this point?

Thank you. You’ve made every moment on this journey one to remember.

This entry was posted in A Look Back, In My Lifetime, My Life and tagged College Days, memories, Ohio University, Scrapbook. Bookmark the permalink.