Being in Dayton this past week for the NCAA Tournament brought back memories that have started to fade from not so long ago. Almost 7 years ago, I was a part of a band of rowdies who were brought together to create a morning show that was to air on 10 affiliates across the country. Instead, it ended up being on over 100 at one point and it is still on the air to this day.

Who IS that masked man?

If you have a CW station in your area, you might be able to catch it. It’s called “The Daily Buzz”, and from August 2002 to April 2004, I was the director for that little morning show that could. Every morning I would get up at 1am and drive to Miamisburg, Ohio (about 8 miles south of Dayton) to direct the show from 6am-9am. It was an exhausting experience, driving so early in the morning, direct for 3 hours, then return home to my newborn son and wife. I even managed to continue to do freelance television on the side to supplement my income! So this meant I might get 2 or 3 hours of sleep a night before having to turn around and do it all over again. 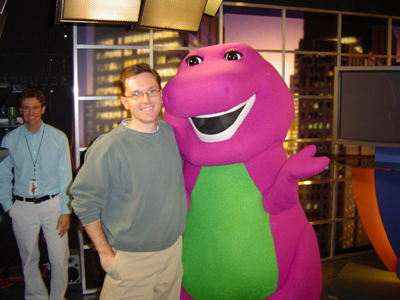 My kids thought this was cool once…

So what is so great about THAT memory? Well…that’s pretty easy for me. For 3 hours a day, my co-workers & I were pretty much left to create 3 hours of programming every morning. The powers that were simply didn’t care WHAT we did! They just wanted us to fill time and try to be entertaining…on a budget. Of course. So there we were…in Miamisburg, OH…trying to compete with not only the local stations, but then we were on in cities all over the place, not having any idea what we were doing or why. And it was the most amazing 1 year and 8 months of my life!

My last day…5 years ago

I don’t know why you do what you do for a living, but I have always wanted to work in television or radio. At no point in my career will I ever be given the freedom to do what we did every day on that show. We would create complete mayhem just because we could! We had a rundown of things to do…but hardly ever did we follow it. From creating goofy videos to adding graphics over our talents’  faces to adding sound effects that were somewhat inapropriate. You name it, we did it. It was down & dirty tv…and we had a lot of fun creating it.

The show has changed a lot since its Dayton days. Several of the crew moved with the show to Orlando in 2005. Only 4 of the original staff remain. The show is tighter now. Less joking around and more organized, but still with the comedic touches. Recently I saw it while I was traveling and it still has that twinkle in its eye. It’s not your typical morning news show, that’s for sure! And hopefully it never will be!

The Out-Of-Control Room…
(Hot Fries, me, Up To The Minute Meko, Lisa Palmetto & B)

I miss my friends who used to work on the show with me. The guys in the control room will ALWAYS have a place in my heart. The talent, editors and the producers were all great to work with! Many have gone on to do other things and have been quite successful! For me, leaving the show almost 5 years ago was one of the hardest things I’ve ever done and I still miss the camraderie and good times we had. If you ever get a chance to catch “The Daily Buzz“, you should check it out! And for your viewing pleasure…here are some moments from when I was on the show. Thanks to Brad the New Guy for posting them!

This entry was posted in My Life, Television Talk, Thoughts and tagged Dayton, Orlando, The CW, The Daily Buzz. Bookmark the permalink.

3 Responses to The Daily Buzz