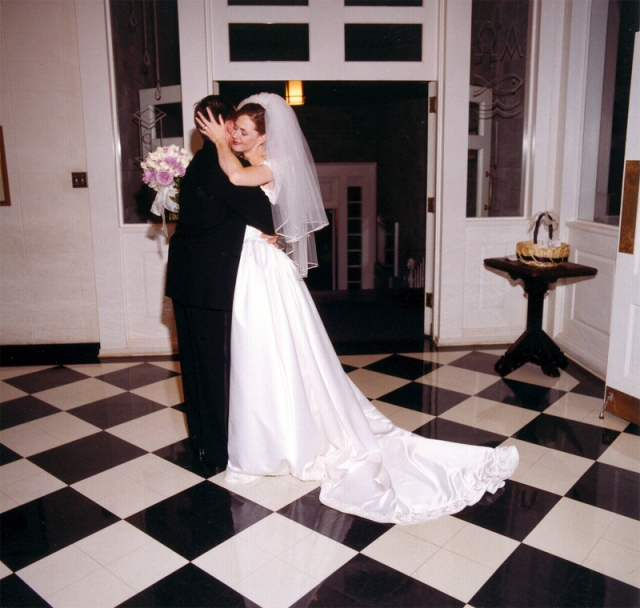 What are your middle names?
Mine is Thomas. Not allowed to tell you Steph’s. If I did, she would kill me!

How long have you been together?
A little over 12 years now. 8 years of wedded bliss. Another 4 years of premarital dating.

How long did you know each other before you started dating?
At the time, we were both working at a television station. I think we knew each other maybe a little over a year.

Who asked whom out?
I don’t think we officially “asked”. It just kind of happened…

How old are each of you?
Well…it has been well documented here that I am 40. As for Stephanie? If I told you that, she would kill me. However I will say that she is MUCH younger than I! (Is that a good response honey?)

Whose siblings do you see the most?
Steph’s sister lives here in town, so probably her. But I take the kids home to visit their aunts & uncle usually 2 or 3 times a summer!

Which situation is hardest on you as a couple?
I travel for work and can be gone several days at a time. So the distance might be the best answer…

Did you go to the same school?
Nope. She grew up in Illinois. Me in central Ohio.

Are you from the same hometown?
Nope. She grew up in Illinois. Me in central Ohio.

Who is smarter?
Depends on the topic. Steph knows more about the kids and all things children related. She is also more knowledgable when it comes to cars, medicines, charities & street names. I am more knowledgable about our money, anything pop culture related, music, movies and other trivial matters. YOU decide who has the bigger brain…

Who is the most sensitive?
Stephanie. Hands down.

Where do you eat most as a couple?
We eat out a lot! Neither of us like to cook. So I would say probably Chipotle…by a nose.

Where is the furthest you have traveled as a couple?
We both went to London this past fall. But she flew in a couple days after I got there. We DID fly home together though. We also went to St. Lucia for our honeymoon and we’ve been to Hawaii. But I think London is farther away.

Who has the craziest exes?
Neither of us have kept track of our past significant others. I was married once before, but she & I have not kept in touch. And Stephanie, as far as I know, hasn’t kept in touch with her former boyfriends either. So neither of us.

Who has the worst temper?
I would say me. I am so low key, but when I do fight, I get loud, foul-mouthed and I fight really dirty. I am not a nice person to fight with.

Who does the cooking?
Neither of us like it, but Steph is MUCH better when it comes to trying to cook! For me, its all about the pasta!

Who is the neat freak?
Me. Hands down. But Stephanie is NOT a messy person either. I just don’t adjust well to disorganization. Steph doesn’t mind having a few piles of stuff here and there. But overall, considering we have a small house and 2 kids, I think we live pretty well together!

Who is more stubborn?
Stephanie. Once I get it all out (see “Who has the worst temper?”), I am probably the first to look at a situation and decide I didn’t really care that much anyways. Stephanie will hold onto it for a while…

Who hogs the bed?
Neither of us. Sometimes Steph forgets when I’m home and she’ll creep over to my side of the bed. But as soon as she realizes it, she rolls back over to her side! LOL

Who wakes up earlier?
Me. No doubt about that one…

Where was your first date?
Jefferson Hall bar in Cincinnati. We went and shot pool. I don’t think either of us cared about the game (obviously). I remember it being a lot of fun!

Who is more jealous?
Me. I realize that I married up. Steph is a great looking woman! So…I guess I probably would consider myself to be more of the jealous type…

How long did it take to get serious?
About what? I am NEVER serious…LOL

Who eats more?
Uh…I’m a guy and I weight a lot more than she does! So…me by a mile! Plus Stephanie eats a lot healthier than I do. For her, it has always been that way. For me, I’m just starting to get used to eating salads and crap like that…

Who does the laundry?
Steph decided long ago that if I EVER put another load of laundry into the washer, it better only be MY clothes. A few too many shrunken blouses and way too many pink socks for her liking, I guess…

Who is better with the computer?
Me. And I have more Facebook friends…

Who drives when you are together?
Me. Because I am a better driver. (LOL!) Actually, I am a more intense driver. And I get restless if I’m not driving. So a lot of the time, Steph concedes that it is better to let me do it.

So there ya have it! Psycho-analyze as much as you want! And so you know…I don’t know if she’ll agree with this, so don’t be surprised if it’s gone in a few minutes…LOL

This entry was posted in Family Life, Marriage and tagged Marriage, Relationships. Bookmark the permalink.